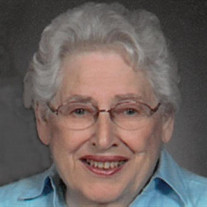 Lucille Ethel Renetta Christensen, the daughter of Walter and Minnie (Behn) Housman, was born December 23, 1924 in Delhi, Minnesota. She received her education in Delhi and later graduating from Redwood Falls High School in 1942. Lucille lived in Milwaukee for a couple of years before returning to Redwood Falls. On August 25, 1946 she married Donald Christensen at St. Matthew’s Lutheran Church in Flora Township, Renville Co. The couple began farming in Vale Township, Redwood County, then moved to Waterbury Township, southwest of Wabasso. In 1951, they moved to a Gilfillan farm in Paxton Township and in 1956 to a Gilfillan farm in Three Lakes Township. They were members of Bethany Lutheran Church where she was a Sunday School teacher and superintendent, active in the Ladies Aid, Altar Committee and church quilting. Lucille was also part of the neighborhood ladies “Sunshine Club”, enjoyed sewing, gardening, dancing, playing cards and traveling. After their retirement from farming, Lucille and Don enjoyed traveling together around the country, visiting family and friends. They moved into Garnette Gardens in May of 2012. Later that year Don passed away on December 27, 2012.

She is survived by her children, Barbara (Terry) Korman of Eagan, Sharon (Donald) Christianson of Greenbush, Janice (David) Heibel of Minnetrista, Christine (Lee) Peterson of Chaska, Dale (Cindy) Christensen of Littleton, Colorado, Larry (Sue) Christensen of Morgan, and Joel (Laura) Christensen of Katy, Texas. Also surviving are 19 grandchildren; 16 great-grandchildren; and a sister-in-law, Arlene Christensen of Redwood Falls. She was preceded in death by her husband Donald on December 27, 2012; 2 brothers; and 2 sisters.

Blessed be her memory.
To order memorial trees or send flowers to the family in memory of Lucille E. Christensen, please visit our flower store.