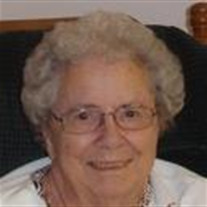 LouElla Jean Kindler, the daughter of Virgil and Orpha (Hildreth) Roberts, was born March 9, 1926 in West Bend, Iowa. She grew up in Rolfe, Iowa and, at the age of 16, moved with her family to Bingham Lake, Minnesota. LouElla graduated from Windom High School in 1944. During World War II, she was employed by the DeSoto and Cream of Wheat factories in Minneapolis. It was while living in Minneapolis, that LouElla met the love of her life, Stanley Kindler, at the Fort Snelling hospital.

On May 30, 1945, LouElla married Stan at the Fort Snelling Chapel. Following his discharge from the service, the couple made their home in Lamberton. While living in Lamberton, LouElla was active in the Ladies’ Aid and Girl Scouts. Later, she and Stan were foster parents to several children. The family moved to Eugene, Oregon in the fall of 1960 and later moved back to Minnesota where they lived in Echo then later Morton and Redwood Falls. LouElla was a member of Entertainment Unlimited for several years, singing in nursing homes throughout Redwood and Renville counties.

LouElla loved music, including singing and dancing. She played piano by ear and sang at many weddings and funerals. LouElla also played the cello in her high school’s orchestra. She loved sewing and hand work. LouElla made wedding dresses for each of her daughters, as well as their attendants’ dresses. She enjoyed playing BINGO, reading, and – most of all – family gatherings. LouElla and Stan loved hunting, history and traveling together with their family. They taught their children the value of family and American history and of honoring those who volunteered to preserve our freedoms in the Armed Services. LouElla and Stan, along with Gary Revier, were instrumental in the establishment of the veteran’s memorial in Redwood Falls. LouElla was a member of First United Methodist Church in Redwood Falls.

Blessed be her memory.
To order memorial trees or send flowers to the family in memory of LouElla Kindler, please visit our flower store.