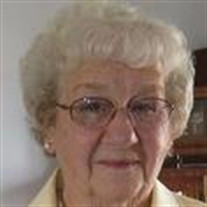 Lorraine Ziegenhagen, 96, of Hutchinson and formerly of Morgan died Sunday, April 9, 2017 at Augustana Dassel Lakeside Community Home. Funeral services will be held at 10:30 a.m. on Friday, April 14, 2017 from St. John Lutheran Church in Morgan with burial to follow in the church cemetery. Visitation will be held Friday, from 9:30 until 10:30 a.m., at St. John Lutheran Church in Morgan.

Lorraine Lillian Lena (Beilke) Ziegenhagen lived a long, healthy 96 years until the Good Lord greeted her on April 9. Born to William and Olga Beilke on September 30, 1920, Lorraine grew up on a farm near Morgan with her six siblings.

Lorraine became the bride of William Ziegenhagen on August 30, 1939 and they were married for 59 years. They farmed near Morgan until 1981 when they retired to their lake home on Diamond Lake in Atwater. They moved back to the farm in 1986 and then, in 1998, moved to Hutchinson to be closer to family. Lorraine and William spent the rest of their lives there.

Lorraine’s hobbies throughout her life included gardening, bowling, embroidery, reading and watching “Judge Judy.” She believed the kitchen was the heart of the home and you could not visit without her making sure you had something to eat.

Blessed be her memory.
To order memorial trees or send flowers to the family in memory of Lorraine Ziegenhagen, please visit our flower store.