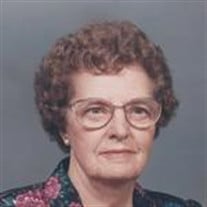 The family requests that memorials be directed to Cornerstone Christian Church in Redwood Falls or Crossroads Christian College, Rochester, Minnesota.

On October 12, 1939, Lola married Ormie Strawzell and they lived on the Strawzell farm – just across the road from Lola’s home farm. She was a homemaker, mother, and primary caregiver for her sons, Larry and Terry. Lola lived on the farm until moving to Garnette Gardens in April 2013. She was a member of Cornerstone Christian Church where she was active in the various women’s ministries. In her spare time Lola enjoyed gardening, church activities, and spending time with her family.

She was preceded in death by her husband Ormie on January 13, 1992; and her sons Larry and Terry.

Blessed be her memory.
To order memorial trees or send flowers to the family in memory of Lola May Strawzell, please visit our flower store.