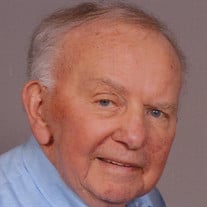 Lloyd Ervin Erickson was born April 4, 1934 to Oscar and Ellen (Christenson) Erickson in Fertile, Minnesota. Lloyd began his education in a country school and graduated from Fertile High School in 1952. He served in the Army and was stationed in Stuttgart, Germany from 1954 to 1956. When he returned from the military he enrolled in North Dakota Agriculture College where he graduated in 1960 with a Bachelor of Science in Economics. He went on to complete his Master of Science degree in Agricultural Economics from North Dakota State University in 1961. During his time at NDSU, Lloyd served as President of the Ag Economics club, and was a member of the Alpha Zeta National Agriculture Honorary Fraternity.

On June 7, 1958, Lloyd married Carol Crane at Our Savior’s Lutheran Church in Crookston. Upon graduation from NDSU in 1961, they moved to Des Moines, Iowa where he began his career with Equitable AgriBusiness. In 1969, they moved to Redwood Falls. In 1998, Lloyd was recognized as a top national producer. He retired in 1999 after 37 years with Equitable.

Lloyd was a member of Gloria Dei Lutheran Church. He served as chair of the financial drive, vice president and president of the congregation, member of the pastoral call committee and the Lutheran Men in Mission Wednesday Bible Study. He enjoyed managing investments, watching sports, traveling, playing bridge, and spending time with his children and grandchildren.

Special thanks to the caregivers at Sunwood Care Center and the Redwood Area Hospital.
To order memorial trees or send flowers to the family in memory of Lloyd Erickson, please visit our flower store.