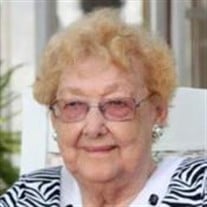 The family requests that memorials be directed to the American Heart Association.

Lillian Grace Woodford, the daughter of Frank and Grace (Miller) Edwards, was born on January 28, 1923, in Morton. Lillian grew up there and graduated from Morton High School. Her father worked on the railroad, and she often spoke of sharing a bag lunch with him at noon when the train passed through Morton. After high school graduation, Lillian worked in St. Paul for Armour and Company.

On October 10, 1943, Lillian married William Eugene Woodford of Redwood Falls. The couple moved to Oregon where Lillian worked in the state capital while William completed his service in the U. S. Army. After World War II, Lillian and her husband moved back to Redwood Falls, where they owned and operated a Standard Oil Service Station. In 1959, the couple sold the service station and purchased a small farm west of Redwood Falls. Lillian also worked for KLGR radio station in Redwood Falls. Upon retirement, Lillian and her husband sold the farm and moved back into Redwood Falls. Lillian became very skilled at decorative China-painting, including cups, plates, vases, tea pots, and other items. Her works were displayed in the Redwood Falls Public Library. Lillian received great enjoyment spending winter months with her husband in Fountain Hills, Arizona. After his death, she moved to White Bear Lake to be near her children.

Lillian is now in the presence of her savior,
To order memorial trees or send flowers to the family in memory of Lillian Grace Woodford, please visit our flower store.