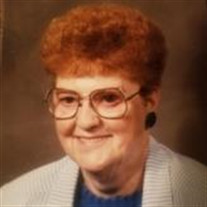 Lillian Jorgensen, age 104, of St. Peter, Minnesota, formerly of Redwood Falls, passed away on Wednesday, October 23, 2019 at the Benedictine Living Community of St Peter, Minnesota. Graveside Services will be held at 11 am on Monday, December 9, 2019 at St. John Lutheran – Coulter Cemetery of Rural Hampton, Iowa.

Arrangements are with the Nelson-Hillestad Funeral and Cremation Services of Redwood Falls. E-mail condolences may be sent via www.nelson-hillestad.com .

Lillian was born on October 2, 1915 to John and Minnie (Knudsen) Thorup in Franklin County, Iowa. She was baptized and confirmed at St. John Lutheran Church of Hampton, Iowa. She attended schools in Dows, Iowa, including college. Lillian married Antoni Jorgenson at the Little Brown Church in Nashua, Iowa on December 31, 1937. They lived on a farm near Dows, Iowa for the first 25 years. They moved to Coulter, Iowa in 1961 and moved to Latimer, Iowa in 1979 and she moved to Redwood Falls in 1981. She worked as a Salesclerk in Hampton, Iowa for 20 years and Ehlers Department Store in Redwood Falls for 12 years. Lillian served on the Altar Guild and Ladies Aides at St. John in Hampton, Iowa. She was involved in a study club and Senior Citizens Active.

She was preceded in death by her parents, John and Minnie Thorup, her husband, Antoni in 1979, and daughter, Cynthia Herberg in 1972.

Blessed be her memory.
To order memorial trees or send flowers to the family in memory of Lillian Jorgensen, please visit our flower store.