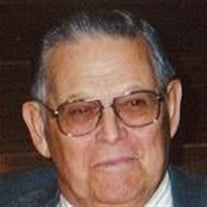 Lester Siegfried, 94, of Redwood Falls died Monday, August 7, 2017 at Parkview Home in Belview. Funeral services will be held at 2 p.m. on Friday, August 11, 2017 from First Presbyterian Church in Redwood Falls. Burial, with military honors, will follow in the Redwood Falls Cemetery. Visitation will be held Friday, from noon until 2 p.m., at the church.

Lester William Siegfried, the son of Ralph and Mary (Waters) Siegfried, was born January 16, 1923 on the family farm in Sheridan Township, Redwood County. He grew up on the farm and received his formal education in Delhi Public School. Lester played basketball for Delhi High School and dated one of the cheerleaders, Bette McKay.

Lester and Bette were married December 4, 1943 in her parents’ home. Lester farmed with his father-in-law for a year and in 1944 they moved to Redwood Falls where Lester drove truck, delivering turkey poults for Mixa Turkey Hatchery. He enlisted in the United States Navy in 1945. Following his honorable discharge, Lester returned to Redwood County. He and Bette farmed east of Delhi until 1951, then moved to a farm in Swedes Forest Township. In 1959, they moved to the farm southwest of Delhi which they later purchased. Lester retired from farming in 1984 and he and Bette moved into Redwood Falls.

Blessed be his memory.
To order memorial trees or send flowers to the family in memory of Lester W. Siegfried, please visit our flower store.