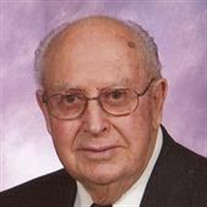 Leonard Leroy Zimmerli, the son of David and Esther (Luescher) Zimmerli, was born November 7, 1919 in Vail Township, Redwood County. Leonard graduated from Wabasso High School in 1939. In 1945, he entered the United States Navy where he worked on motors. After his honorable discharge, Leonard farmed the family farm.

A bachelor for 49 years, Leonard married Belva (Brandt) Reese in 1969. Together, they lived and farmed until his retirement in 1980 when they moved to Redwood Falls. They enjoyed many years at their lake homes on Pelican and Diamond lakes. At the age of 50, Leonard was proud to have a daughter; being a grandfather brought him so much love and joy.

Leonard held offices in the Pilgrim United Methodist Church of Wabasso and First United Methodist Church of Redwood Falls. He held a supervisor position in Vail Township. Leonard enjoyed his life and had a great sense of humor. He enjoyed many travels, including their many trips to Branson, and visiting Hawaii twice, Alaska, Germany and Switzerland. Leonard valued his Swiss heritage. He enjoyed bowling, golfing, and many fishing and deer hunting trips “Up North” with his buddies. Leonard also enjoyed wood-working and was a “Mr. Fix-it.” He loved visiting with his friends at coffee and was devoted to his family.

Leonard only recently began experiencing declining health and became a resident at Wood Dale Nursing Home in Redwood Falls where he passed away on Saturday, April 11, 2015 at the wonderful age of 95 years, five months, and four days!!

Leonard was preceded in death by his parents; sister Lorraine Johnson; a brother in infancy; brothers-in-law Jerry Johnson and Arthur Anderson; and stepson Steve Reese.

Blessed be his memory.
To order memorial trees or send flowers to the family in memory of Leonard Leroy Zimmerli, please visit our flower store.