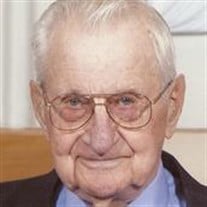 Leonard E. Otto age 94, of Morgan died Monday, May 29, 2017 in Gil-Mor Manor in Morgan. Funeral services will be held at 10 a.m. on Tuesday, June 6, 2017 from Zion Evangelical Lutheran Church in Morgan with burial on Wednesday, June 7, 2017 at 2 p.m. in Fort Snelling National Cemetery. Visitation will be held at the Zion Evangelical Lutheran Church in Morgan from 4 until 7 p.m. on Monday June 5, 2017 and will continue on Tuesday from 9 until 10 a.m. in the church.

Leonard Eugene Otto, the son of Robert and Emma (Raddatz) Otto was born August 31, 1922 on the family farm in Eden Township, Brown County. Leonard was baptized and confirmed at Zion Evangelical Lutheran Church where he was a lifelong member. He grew up on the family farm and received his education in Brown and Redwood county schools. Leonard worked as a farm hand before entering the U.S. Army, serving in the Pacific Islands with Co I, 130th Inf. during World War II. He was discharged in 1946 from the Army and worked at Lamp Chevrolet. Leonard and his brother Emmett (Bud) bought the Pure Oil Station in Morgan operating it until 1985 when he retired.

On August 12, 1961, Leonard married Alice Reding in San Diego, California and they lived in Morgan since. He was a member of Zion Evangelical Lutheran Church in Morgan, Morgan VFW, Disabled American Veterans, Chapter 15 of New Ulm Purple Hearts. Leonard enjoyed spending time with his wife, daughters, and grandchildren.

Leonard is survived by his wife Alice of Morgan; daughters LuAnn (Mike) Kalbfell of Lakeville, Sharon (Joe) Wersal of Winthrop, Sandy (Phil) Nestande of Fairfax, and Connie (Jim) Swoboda of Redwood Falls; 10 grandchildren; and eight great-grandchildren. He was preceded in death by his parents; an infant daughter; his grandson Nick Wersal; and his three siblings Violet Dahn, Gertrude Johnson, and Emmet Otto.

Blessed be his memory.
To order memorial trees or send flowers to the family in memory of Leonard E. Otto, please visit our flower store.