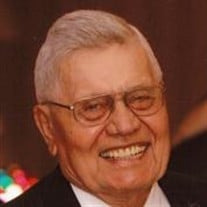 Leonard Kodet, 91, of Redwood Falls died Monday, May 16, 2016 at Redwood Area Hospital. Mass of Christian Burial will be held at 10:30 a.m. on Friday, May 20, 2016 from St. Catherine’s Catholic Church in Redwood Falls. Burial, with military honors, will follow at the church cemetery. Visitation will be held Thursday, May 19, 2016, from 4 until 7 p.m., with a prayer service at 6 p.m., all at Nelson-Hillestad Funeral Home in Redwood Falls. Visitation will continue at the church on Friday, from 9:30 until 10:30 a.m.

Leonard Joseph Kodet, the son of Joseph C. and Louisa (Senkyr) Kodet, was born December 11, 1924 in Henryville Township, Renville County. He grew up on the family farm and received his elementary education in the nearby country school and Morton Public School, graduating from Morton High School in 1942. Leonard was inducted into the United States Army on August 31, 1944. He served with the 67th Armored Regiment as a tank driver in the Rhineland and Central European campaigns and was honorably discharged on August 26, 1946.

On October 29, 1947, Leonard married Betty A. Malecek at St. Mary’s Catholic Church in Bechyn. They made their home in North Redwood where Leonard was employed by the North Redwood Farmers Elevator for 38 years. Following his retirement, Leonard spent a lot of time at the cabin on Lake Koronis. The couple moved into Redwood Falls in 2009. Leonard was a member of St. Catherine’s Catholic Church where he served as a money counter and an usher. He was a lifetime member of the Knights of Columbus. Leonard belonged to the American Legion and the VFW and served as Treasurer for the Village of North Redwood for many years.

He is survived by his children Carolyn Kissel of Yankton, South Dakota, Allan (Diane) Kodet of Paynesville, and Robert (Laurie) Kodet of Northfield; six grandchildren; one great-grandchild; sister Angela Kohout of Olivia; and brother Bonnie Kodet of Cross Lake. Leonard was preceded in death by his wife Betty on May 9, 2013; son-in-law William Kissel; and brothers Otto and Elmer.

Blessed be his memory.
To order memorial trees or send flowers to the family in memory of Leonard Kodet, please visit our flower store.