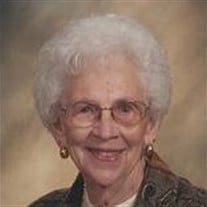 Leona E. Arnett, the daughter of Harry Clifford “H.C.” and Daisy (Peters) Wood, was born April 20, 1920 in Redwood Falls. She grew up in Redwood Falls and received her formal education here.

On September 25, 1941, Leona married Fred “Ted” Jones at the Presbyterian Church in Redwood Falls and, together, they farmed in Redwood County. Ted passed away in June 1967. On September 15, 1973, Leona married Thomas “Tom” Arnett and they made their home in Redwood Falls where Tom owned and operated a school bus line. Leona was a member of First Presbyterian Church where she was active in ladies’ circle and on the funeral committee. She was ordained as an Elder and a Deacon and was a member of the Piecemakers quilters. Leona was a member of the Eastern Star, the Wood Dale Nursing Home Auxiliary, the Birthday Club and Extension Club. She enjoyed exhibiting her flowers at the Redwood County Fair and had served as superintendent of the flower division for several years. Leona loved her family and spending time with them. She taught them how to bake, sew, and make dill pickles.

Blessed be her memory.
To order memorial trees or send flowers to the family in memory of Leona E Arnett, please visit our flower store.