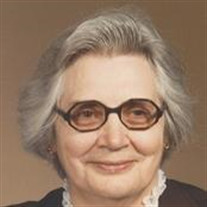 Lena Bock, 91, of Springfield died Tuesday, July 19, 2016 at St. John Lutheran Home. Funeral services will be held at 11 a.m. on Saturday, July 23, 2016 from Trinity Lutheran Church in Sleepy Eye with burial to follow in Home Cemetery, Sleepy Eye. Visitation will be held Saturday, at the church, from 9 until 11 a.m.

Lena Mae Bock, the daughter of George and Floella (Stevens) Collins, was born November 27, 1924 in Huron, South Dakota. She grew up in Huron and Sleepy Eye.

On November 9, 1944, Lena married Lloyd Bock in Sleepy Eye. The couple made their home there until moving into Springfield in 2006. Lloyd died in July 2010 and Lena became a resident of St. John Lutheran Home in April 2011.

Lena worked as a nurses’ aide and a home health aide for Brown County and Divine Providence Home. She was a member of Trinity Lutheran Church.

She was preceded in death by her husband Lloyd; brother Grant; sister-in-law Betty Collins; one grandson; and brothers-in-law and sisters-in-law Robert and Mildred Bock, Harvey and Dorothy Sorenson, Ambrose and Pearl Hornick, Leo and Rosella Deterling, John Bock, and Pat Patterson.

Blessed be her memory.
To order memorial trees or send flowers to the family in memory of Lena Bock, please visit our flower store.