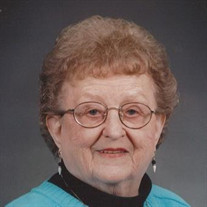 Leah Monica Dolezal was the seventh of 13 children born to George and Maria (Simon) Hammerschmidt. She grew up in the Wabasso area and received her formal education in Wanda School District 94 and Lucan School District 113. As a young woman, Leah traveled to Washington state. Several years later, she followed her heart back to her Wabasso roots where she soon met Frank J. Dolezal. They were married on November 10, 1949 in Wabasso and lived in Wabasso and Redwood Falls before relocating to California with their four children. Six years later, Leah and family moved back to Redwood Falls.

Leah was a housekeeper and did child care for several families in the area, as well as worked as a cook at the hospital and the day care center. Leah inherited her dad’s gift of music and she loved sharing that gift with her family and friends. She loved playing her harmonica, embroidering, quilting, and dancing. Leah loved any kind of gathering, whether it was simply going to church, a wedding, or a dance – she was all about having a good time. She was the life of the party!

Her family was most important to her and Leah was proud of all her kids, grandkids and great-grandkids. She was a kind, sensitive and compassionate soul and passed this on to her four daughters and grandchildren. Leah is survived by her daughters Lorna (Alfred) Nelsen of Redwood Falls, Debra Franklin of Annandale, and Renee (Dana) Lindeman of Wabasso; six grandchildren; 12 great-grandchildren; two great-great-grandchildren; and her sister and brother-in-law Elaine and Norman Rudenick of Redwood Falls. She was preceded in death by her husband Frank in 1981; daughter Nancy Rolla in 2013; seven brothers; five sisters; and one half-sister.

Blessed be her memory.
To order memorial trees or send flowers to the family in memory of Leah Dolezal, please visit our flower store.