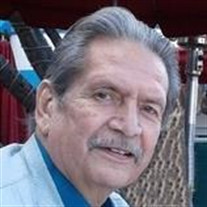 Larry Wayne Blue, 71, of Prior Lake, formerly of Minneapolis, passed away peacefully on January 30, 2019. He was surrounded in his final days by many of the special friends and relatives he loved so much. Funeral services will be held at 10 a.m. on Tuesday, February 5, 2019 from the St. Cornelia’s Episcopal Church Guild Hall on the Lower Sioux Community with burial to follow in the church cemetery. Visitation will be held Monday, February 4, from 4 – 7 p.m. with prayer service at 7 p.m. at the Nelson-Hillestad Funeral Home in Redwood Falls. Visitation will continue on Tuesday at the church hall, from 9 – 10 a.m.
Arrangements are with Nelson-Hillestad Funeral and Cremation Service of Redwood Falls. E-mail condolences may be sent via www.nelson-hillestad.com .
Larry was born on January 29, 1948 to Violet Pearl (Jones) Blue and Howard Wilson Blue at the Indian Hospital in Pipestone, Minnesota. He was a direct descendant, historically documented, of Mdewakanton leader Cloud Man and military artist, Lt. Seth Eastman. Larry attended country school at the Lower Sioux Community and graduated from Morton High School. He had a life long passion for the arts that took him across the country through his adulthood, including California and New Mexico. It was there that he met and befriended many important artists; RC Gorman and Dorothy Brett were among them; in the Taos area and perfected his painting and pottery skills. These talents lead him to start the first pottery business at the Shakopee Mdewakanton Sioux Community, then took him to work in pottery at the Lower Sioux Indian Community and management of the Glass Wigwam, a native art store at the Minneapolis American Indian Center. Larry was devoted to his family and friends and they to him. In the words of one of those close to him he was “very wise, passionate, loving and a true gentlemen”.
Larry was preceded in death by his mother and father, brothers Ronald Blue, Michael Blue, and Patrick Blue. He is survived by his sister Sally (Blue) Milroy and brother Gerald (Mary) Blue and many nieces and nephews.
Special thanks to LaVonne “Peps” Columbus, Debbie (Prescott) Robertson, Rita Goodthunder and his cousin Debbie Crooks - Hill. Their love and devotion to him throughout his life and his illness were a source of strength and comfort.
He will be greatly missed by those who had the privilege to know him.
Blessed be his memory.
To order memorial trees or send flowers to the family in memory of Larry Wayne Blue, please visit our flower store.