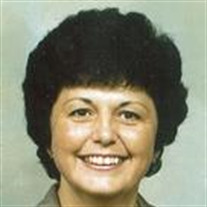 LaDonna Mary Gilb, the daughter of Alvin and Mary (Bott) Gilb, was born October 6, 1940 in Tracy, Minnesota. She grew up in the Milroy area and received her formal education in Milroy Public School. LaDonna graduated from Milroy High School in 1958.

On September 5, 1959, LaDonna married Harlan Raddatz at Our Savior’s Lutheran Church in Milroy. The couple farmed south of Redwood Falls until retiring and moving into Redwood Falls in 1995. LaDonna was a homemaker and enjoyed helping around the farm. She enjoyed working in her flower garden and loved spending time with her grandchildren. LaDonna moved to Prairie Senior Cottages in 2008.

She was preceded in death by her husband Harlan in March 2017, her grandson Keaton Lee Raddatz, daughter-in-law Shelly Raddatz, her parents, and two brothers.

Blessed be her memory.
To order memorial trees or send flowers to the family in memory of LaDonna Raddatz, please visit our flower store.