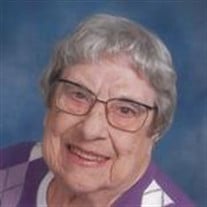 LaDonna Revier March Lodermeier, the daughter of Robert and Camilla (Voltin) Revier, was born September 8, 1929 in Morton. She spent her childhood in Morton and received her elementary education there. Donna graduated from Redwood Falls High School in 1947 and then attended Mayville North Dakota State Teachers College. She graduated from Mankato State College with a bachelor’s degree in education. Donna taught country school in Hope, North Dakota and then in the “town” schools in Wahpeton, North Dakota, and Franklin and Glencoe, Minnesota. She also worked as a substitute teacher in Shakopee and Glencoe.

She is survived by step-daughters and spouses Ann and Neil Johnson, Mickie and Kelly Hanson, Jeanne and David Kibler, Colleen and Craig Gunderman, and Mary and Gary Sima; many step-grandchildren; nieces and nephews; brothers-in-law and sisters-in-law; and special neighbors – the Steve Clay family.

LaDonna was preceded in death by her parents; two husbands; brothers John, Bill, and Bert; sisters Leone, Grace, and Mary; and two brothers and two sisters in infancy.

Blessed be her memory.
To order memorial trees or send flowers to the family in memory of LaDonna Revier March Lodermeier, please visit our flower store.