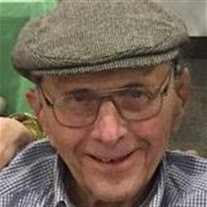 The family requests contributions be directed to the Franklin Lions Club.

Kermit Leroy Ness, the son of Louis and Clara (Bossenecker) Ness, was born April 15, 1927 in Camp Township, Renville County. He grew up on the family farm in Camp Township and received his formal education in Franklin Public School. Following his graduation in 1945, Kermit farmed in Camp Township.

On June 25, 1959, Kermit married Darlene Lund and together they raised their family and farmed in rural Franklin. Kermit was an “ambassador” of Franklin and the surrounding communities – inviting everyone he met to come and visit Franklin for Catfish Derby Days. Kermit loved people and enjoyed visiting friends and meeting for coffee or a drink. He especially enjoyed spending time with his grandchildren and attending their sporting events and activities. Kermit like to go hunting and fishing, and take scenic drives in the Minnesota River Valley.

Kermit was preceded in death by his wife Darlene in 2005, and his brother Billy.

Blessed be his memory.
To order memorial trees or send flowers to the family in memory of Kermit Ness, please visit our flower store.