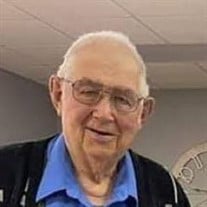 Kenneth “Kenny” Robert Kruse, age 80, of Wabasso, Minnesota, passed away peacefully on Sunday, November 21, 2021 at his home in Wabasso. Funeral Services will be at 10:30 am on Monday, November 29, 2021, at Trinity Lutheran Church in Willow Lake Township, rural Wabasso, with burial to follow at the Trinity Lutheran Cemetery. Visitation will be Sunday, November 28 from 4:00 pm until 7:00 pm at the Nelson-Hillestad Funeral Home in Redwood Falls and will continue from 9:30 am until 10:30 am on Monday, November 29, 2021 at Trinity Lutheran Church in Willow Lake Township, rural Wabasso.
Arrangements are with Nelson-Hillestad Funeral and Cremation Service of Redwood Falls and Morgan. Email condolences may be sent via www.nelson-hillestad.com .
Kenneth Robert Kruse was born to Erwin and Blanche (Wittwer) Kruse on July 5, 1941, in Delhi Township, Redwood County. He grew up in Delhi Township, near Gilfillan and Wabasso. Kenny graduated from Wabasso High School in 1959. He joined the Army in November 1960, stationed in Washington State. He was honorably discharge as the family needed him to help with the farm in July 1962. Kenny married the love of his life, Phyllis Bock on August 27, 1966 in Sleepy Eye. Together they farmed near Wabasso and raised their 5 daughters.
Kenny had attended Law Enforcement School. He served the communities of Sanborn, Springfield, Walnut Grove, Wanda, Morgan and Lamberton as a police officer. He also was an avid hunter, enjoyed fishing and spearfishing. He looked forward to his fishing trips to Canada. He enjoyed playing cards and drinking coffee with his friends and teaching his grandchildren to play cribbage. Some of his favorite trips were to Alaska, wanting to return to ride the train and revisiting the Panama Canal.
Kenny was the Trinity Cemetery Sexton for 50 years. He was a member of Wanda Fire Department for 20 years and Wanda American Legion where he played taps for the honor guard. He was also on the Redwood County Fair Board for many years. He was a member of Trinity Lutheran Church where he held many positions over the years.
He and mom would go for drives and enjoy an ice cream treat together. Kenny enjoyed teasing, playing jokes, and tickling his grandchildren and great grandchildren.
Although we mourn, we can also celebrate! Kenny knew Jesus and loved him dearly, he can now sit at His feet and sing loudly for all to join in. He can tickle and tease so many and give his words of wisdom to all.

Kenny is preceded in death by his parents, Erwin and Blanche, father-in-law and mother-in-law, Lloyd and Lena Bock, brother-in-laws Rueben Weigert and Ken Schumacher, also nieces and a nephew.

Blessed be his memory.
To order memorial trees or send flowers to the family in memory of Kenneth "Kenny" Robert Kruse, please visit our flower store.