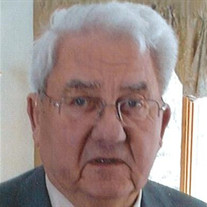 Kenneth “Corky” Raphael U’Ren, the son of Lafayette “Leif” and Regina (Neuroth) U’Ren, was born February 1, 1929 on the family farm northwest of Fairfax in Bandon Township, Renville County. When Corky was five years old his father died, and his mother was needed to help his ailing sister. So Corky went to live with his uncle and aunt, Harold and Ruth U’Ren. He started school at the age of 4-1/2 and received all of his formal education in Renville County District School. Corky graduated eighth grade with the highest mathematics score in the state of Minnesota. By the age of 13, Corky was living with his sister and brother-in-law, Marian “Meg” and Ben Nelson, and working at Nelson Stockyards for room and board. He started driving cattle and hog trucks to South St. Paul when he was 17 years old.

Corky was inducted into the United States Navy in 1951 and was a Seabee stationed in Guam with the 103rd Naval Construction Battalion. Following his honorable discharge in 1953, Corky returned home to Renville County. On November 30, 1953, Corky married Janet Fay Maurer in the Franklin parish hall. They lived in Franklin until moving to Morton in 1960 where, with the exception of 10 years spent in Arizona in the 1980s, they lived their entire married life.

Corky worked at Nelson Stockyards until 1969 when he became a salesman for Floyd Munsell at Franklin Homes. Two years later he opened Corky’s Housing Mart in Redwood Falls. He also operated Normandale Park and then opened Everstrong Earth Sheltered Homes, which later became Everstrong. Corky was the consummate entrepreneur and was always looking for the next project, right up until the time of his death. In his “retirement” Corky delivered motor homes over a 10-year period to the continental United States and Canada – as well as 56 motor homes to Alaska. He enjoyed buying and selling cars, catching fish (but not fishing), drawing home plans and making up jingles. Corky loved flowers, gardening, collecting rocks and coins and flying his Piper PA-11 airplane.

Corky was preceded in death by his parents; his wife Janet in February 2012; and his siblings Tom, Harold, Edsel, Marian “Meg,” Thelma, and Kate.

Blessed be his memory.
To order memorial trees or send flowers to the family in memory of Kenneth "Corky" U'Ren, please visit our flower store.