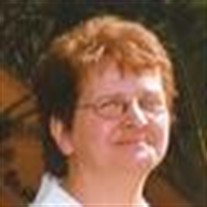 June Marie Hutchinson, the daughter of Stanley and Dorothy (Minkel) Jakes, was born August 7, 1953 in Olivia, Minnesota. June, and eight of her siblings, were baptized in January 1962; June was confirmed in April 1969 at Our Savior’s Lutheran Church in Bird Island. June grew up in Bird Island and graduated from Bird Island Lake Lillian High School.

On March 23, 1974, June married Gerald D. Hutchinson at Our Savior’s Lutheran Church in Bird Island and the couple made their home in Redwood Falls. They moved to Winthrop for a short time before returning to Redwood Falls where they have lived since. June was proud to be a homemaker and “child development specialist.” June dearly loved her family and cherished every moment she had with them. She was a member of Gloria Dei Lutheran Church. June was a self-proclaimed animal lover and, in 2008, took it upon herself to raise money for the animal shelter. Although fighting a battle with cancer at the time, June went door-to-door throughout Redwood Falls, asking for donations to the animal shelter. She ultimately raised over $2,200 which, in turn, sparked a groundswell of community-wide support for the shelter.

She was preceded in death by her parents, and her daughter Stacy Lynn Hutchinson.

Blessed be her memory.
To order memorial trees or send flowers to the family in memory of June Marie Hutchinson, please visit our flower store.