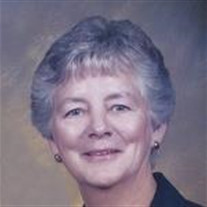 Judith “Judy” Greenslit, 73, of Redwood Falls, and formerly of Willmar and Franklin, died Monday, May 19, 2014 at Golden Living Center in Franklin. Memorial services will be held at 6:30 p.m. on Tuesday, May 27, 2014 from Nelson-Martin Funeral Chapel in Redwood Falls with burial to be held at a later date. Visitation will be held Tuesday, May 27, from 4 until 6:30 p.m., at the funeral home.

The family requests memorials be directed to First United Methodist Church of Redwood Falls, Seasons hospice in Redwood Falls, or The Alzheimer’s Association.

Judith LuAnn Greenslit, the daughter of John and Martha (Landers) Squibb, was born September 5, 1940 in Birch Cooley Township, Renville County. She spent her early years in the Morton area and attended Morton Public School until the fourth grade. Judy then moved with her family to Hector where she completed her education. Judy graduated from Hector High School in 1958 and then enrolled at Hamline University.

On April 30, 1961, Judy married Jerry Greenslit in Hector and they made their home on the family farm. Judy was a homemaker, but first and foremost a loving wife and mother. She was an excellent cook and was well-known for her pies and hospitality. Judy was named Miss Betty Crocker in the early 1960s. She also loved to sew, garden, play golf, and tend the beautiful rock garden inherited from her mother-in-law. Judy and Jerry enjoyed their travels across the United States and Europe.

She was a life-long member of the Methodist Church and served on the Morton School Board for many years. In 1999, Judy and Jerry retired to their home on Eagle Lake, near Willmar. Following Jerry’s death in December 2011, Judy moved to Garnette Gardens in Redwood Falls.

She is survived by her children Brian (Gloria) Greenslit of Franklin, and Scott Greenslit of Franklin; grandchildren Jack, Dallas, Austin, Kelsey, Shane, and Taylor; her siblings Barbara (Gary) Gustavson of Minnetonka, Janet (Cliff) Woodford of Mankato, Pam (Mike) Lewis of Queen Creek, Arizona, Jack (Jan) Squibb of Hector, Glenda (Gary) Proell of St. Cloud, and Becky (Gary) Hauer of San Tan Valley, Arizona; and many other relatives and friends. Judy was preceded in death by her parents; her step-father Joe Dawson; her husband Jerry; and her brother Bobby.

Blessed be her memory.
To order memorial trees or send flowers to the family in memory of Judith "Judy" LuAnn Greenslit, please visit our flower store.