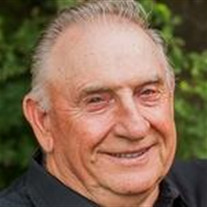 Arrangements are with Nelson-Hillestad Funeral and Cremation Service of Redwood Falls. E-mail condolences may be sent via www.nelson-hillestad.com

Joseph Peter Malecek, the son of Peter and Anna (Zimma) Malecek, was born April 2, 1937 on the family farm near Bechyn, Minnesota. He attended school in Danube and graduated from Danube High School. Joe served in the Army National Guard unit in Olivia for eight years; he also served on the North Redwood Elevator Board, the Danube School Board and the MinnWest Bank board of directors.

On July 9, 1963 Joe married Betty Rubischko in Gibbon, Minnesota and they settled on the family farm near Bechyn where they worked together for the next 22 years. They then moved a few miles south where they continued to farm and raise hogs with his family – Joe never really retired. He enjoyed spending time playing cards, spraying weeds, mowing lawn, and telling jokes. Joe loved spending time with his children and especially his grandchildren. He was a member of St. Catherine’s Catholic Church in Redwood Falls.

Blessed be his memory.
To order memorial trees or send flowers to the family in memory of Joseph "Joe" Malecek, please visit our flower store.