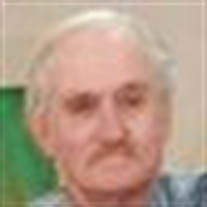 Johnny Marlow, 65, of Redwood Falls died Monday, June 1, 2015 at his home. Funeral services will be held at 11 a.m. on Friday, June 5, 2015 from Nelson-Hillestad Funeral Home in Redwood Falls. Burial, with full military honors, will follow in the Redwood Falls Cemetery. Visitation will be held at the funeral home on Thursday, June 4, 2015, from 5 until 7 p.m., and will continue on Friday from 10 until 11 a.m.

Johnny Joseph Marlow, the son of William and Zadie (Shubert) Marlow, was born February 16, 1950 in Maysville, Georgia. He grew up in Homer, Georgia and received his formal education there. Johnny was inducted into the United States Army and served in Vietnam. He was honorably discharged on September 15, 1971.

On May 19, 1971, Johnny married Joyce Hewett at the Church of Christ in Redwood Falls. They made their home in Redwood Falls where Johnny was employed as a sanitation worker for Curry Sanitation and Prescott Sanitation. He retired in 2012.

Johnny is survived by his wife, Joyce, of Redwood Falls; children Christopher (Tashi) Marlow, Timothy (Rebekah) Marlow, Tonya (Darrell) Henning, and Kyle (Jessica) Marlow, all of Redwood Falls; and grandchildren Dylan, Derek, Courtney, Elijah, and Eisley Marlow. Also surviving are his sisters Lena (Walt) Griswell of Cornelia, Georgia, and Dianne (James) Wills of Jefferson, Georgia; and sisters-in-law Ethel Marlow and Belva Marlow, both of Maysville, Georgia, and Shirley Marlow of Greenville, South Carolina. He was preceded in death by his parents, four brothers, and two sisters.

Blessed be his memory.
To order memorial trees or send flowers to the family in memory of Johnny Joseph Marlow, please visit our flower store.