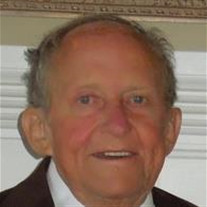 John Rollie Watkins, the son of Rollie and Carrie (Willcox) Watkins, was born June 4, 1936 in Delhi. He grew up on a farm near Delhi and received his formal education in Redwood Falls Public School. John moved to Alberta, Minnesota for a time and then joined the United States Navy where he was stationed in San Diego. Following his honorable discharge, John returned to Minnesota.

On April 26, 1958, John married Carol Wertish in St. Mary’s Catholic Church in Bechyn. The couple made their home in Mankato while John attended Mankato State College, where he majored in mathematics and physics – and worked construction. Following his graduation in 1963, the family settled in Apple Valley where John worked as a computer engineer. They moved to Huntsville, Alabama in 1983 and then to Montgomery in 1986. John opened his own business, Performance Support, Inc., in 1984 and was self-employed in the field of computer engineering until his retirement in 2001.

John was a member of Church of the Holy Spirit in Montgomery where he served as an usher and belonged to the Knights of Columbus. He enjoyed playing cards, golfing with friends, and going on excursions with the church group.

John is survived by his wife Carol of Montgomery; children David Watkins of Centennial, Colorado, Debra Watkins of Wetumpka, Alabama, and Kent Watkins of Montgomery. Also surviving are his grandchildren Angela (Chris) Harazin, Jonathan Watkins, Marcus Mayberry, Madolyn Mayberry, and Zoe Watkins; and sisters Harriet Jensen and Lucille Nelson, both of Redwood Falls. He was preceded in death by his brother Donald Watkins, and sister Dorothy Ruoho.

Blessed be his memory.
To order memorial trees or send flowers to the family in memory of John Watkins, please visit our flower store.