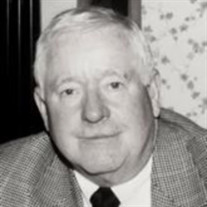 John “Jack” J. Smith, age 86, of Redwood Falls, Minnesota, passed away peacefully at his home under the care of Carris Health - Redwood Hospice on Wednesday, February 26, 2020. A Memorial Service will be held at 11 am on Thursday, September 10, 2020 at St. Catherine’s Catholic Church in Redwood Falls.

John Joseph “Jack” Smith was born to John Joseph Smith Sr and Kathleen (Fletcher) Smith on April 28, 1933 in Minneapolis, Minnesota. Jack was raised in Minneapolis where he attended St. Anne’s School until 1948 where he had served as an altar boy for Father Jeffry O’Sullivan. The family moved to Redwood Falls where Jack graduated from Redwood Falls High School in 1951. In 1955 he joined the Army and was honorably discharged in 1957. Jack married Marilyn Buskey in Madison Lake, Minnesota on February 27, 1960. They started their life in Redwood Falls and moved to Arvada, Colorado in 1969 and moved back to Redwood Falls in 1973. Jack was an Insurance Broker for 50 years, of which he was a partner/owner of Minnesota Valley Agency, LLC. He retired in 2004. Jack loved spending time with family and friends at the Leech Lake Cabin, fishing for walleye and enjoying the view from the deck. He enjoyed a successful career in golf and loved to hunt throughout Minnesota and out west. His family was important to him, especially his Grandchildren and Great-Grandchildren.

Jack was a member of St. Catherine’s Catholic Church. He was a past president of the Redwood Falls Golf Club and a longtime member of Neogahbow Hunting & Fishing Club. Although Jack struggled with a neurological disease that made it difficult to be mobile in many aspects, he would find the courage and strength to overcome, doing the things he loved to do - many times, without fail, with the help of Marilyn. She was there for him providing daily caregiving for 40 years following diagnosis to his final days.

Blessed be his memory.
To order memorial trees or send flowers to the family in memory of John "Jack" J. Smith, please visit our flower store.