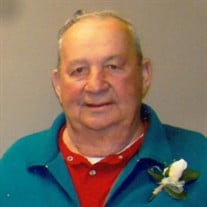 John “Jack” Heiling, age 79, passed away August 28, 2022 at his home in Morgan. A Funeral Service will be held at 11:00 a.m. on Thursday, September 1, 2022 at St. Michael’s Catholic Church in Morgan. Visitation will be held from 5:00 until 7:00 p.m. on Wednesday, August 31, 2022 at Nelson-Hillestad Funeral Home in Morgan. Visitation will continue from 9:00 until 11:00 a.m. on Thursday, September 1, 2022 at St. Michael’s Catholic Church in Morgan. Burial will be a private graveside at a later date in St. Michael’s Catholic Cemetery.
Arrangements are with Nelson-Hillestad Funeral and Cremation Service of Morgan. Condolences may be sent via www.nelson-hillestad.com .
John “Jack” William Heiling was born October 28, 1942 in Redwood County to Alois and Evelyn (Heiderschiedt) Heiling. He went to Catholic School thru 8th grade and public school. Jack helped with farm work until he went into the Navy in 1964. When he came home, he worker for Mathiowetz construction then Heiling Brothers Construction and then J & J Salvage. Jack then when on to owning his own construction company for 50 years, retiring in 2010. Jack married Barb Fischer on October 1, 2021 and resided in Morgan. He enjoyed driving around Morgan in his golf cart, inspecting the town to make sure everything was going right! Jack was known as the inspector, as he was always looking over the town and everything going on.
He is survived by his wife, Barb Fischer of Morgan; children, Scott (Maria) Heiling of Temecula, CA, Michelle Zore of Fortville, IN; sister, Judy (Jerry) Huiras of Morgan; sister-in-law, Deb Heiling of Sleepy Eye; grandchildren, Ryan, Eric, Emily, Bryant, Grant, and Brett.
Jack was preceded in death by his parents; sisters, Jeanie Gareis and Janice Mohlenbrock; and brothers, Jim Heiling and Joe Heiling.
Blessed be his memory.
To order memorial trees or send flowers to the family in memory of John "Jack" Heiling, please visit our flower store.