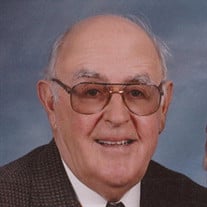 John was born, together with his twin brother George, on August 26, 1927 to Cyril and Denage (Regnier) Buckley in Minneota, Minnesota. Due to the difficult economic situation at that time, the family moved often, and John attended grade school in Minneota, Ghent, and St. Peter. He eventually graduated in 1945 from Mankato High School – where he met his future wife Caroline.

After serving a year in the US Navy from 1945-1946, John studied horticulture at the University of Minnesota. He and Caroline were married on July 15, 1950, at Holy Rosary Catholic Church in North Mankato, and shortly afterward made their life-long home in Redwood Falls. They were blessed with 67 years of marriage and four children.

In 1951, John and his brother Bob started the Redwood Falls Nursery, which he eventually co-owned together with his three sons. Through years of hard work and a good business sense, the Redwood Nursery flourished and is well-known throughout Southwestern Minnesota. John loved his work, and his contacts with customers often evolved into life-long friendships. His gardening and landscaping skills were evident in the beauty of his own yard and the hours he spent working there.

John actively contributed to the local community in many ways over the years. He served on the City Planning Commission, Public Utilities Commission, and Police Commission. He was a member of the Redwood Falls School Board, where his leadership was instrumental in the construction of a new middle/high school in 1991. Together with his wife Caroline, John was an active member of St. Catherine’s Parish, and worked for many years as director of the Redwood County Food Shelf.

John was an outdoorsman in the best sense of the word. He was an avid hunter and had a deep respect and appreciation for the beauty of nature and God’s creation. He belonged to many conservation organizations and was a life member of Ducks Unlimited. During the winter months, his love of nature found expression in his wildlife paintings – a talent he developed over the course of decades. Even more than the hobby itself, he enjoyed sharing these works of art with friends, or donating them for charitable causes.

Above all, John was a devoted and caring husband, father, and grandfather, and a faithful friend whose genuine goodness, integrity and deep faith touched the lives of many. His down-to-earth approach to life and sense of humor were a blessing for those who were privileged to know him. With his straightforward manner, John wasn’t one to mince words. Everyone knew where they stood with him, and regardless of the issue at hand, they could count on his sincerity and friendship. As active as he was throughout his life, it was impressive to see how he accepted the struggles of aging and illness with a positive spirit, gratitude, and ongoing interest in the well-being of those around him.

John is survived by his children Jim (Margie), Paul (Mary), and John Jr. (Brenda Rasmussen) all of Redwood Falls, and Sr. M. Joanna of Vallendar, Germany; grandchildren Tim, Katie, Kris (Josh), Matt (Laura), Andy, Erin (Cory), Melissa, Allison, and Jessica; 18 great-grandchildren; and many other relatives and friends. He was preceded in death by his parents, his twin brother George who died in infancy, siblings Wendell, Fr. Gordon, Bob, and Loretta, and by his loving wife Caroline.

We extend our gratitude to the staff at Wood Dale Nursing Home and Gil-Mor Manor for all they did for Dad over the past 2 years. Above all, we give thanks to God for the gift of his long and fruitful life. May he rest in peace.

Memorials will be used to establish a scholarship in John and Caroline’s name and can be sent to PO Box 304, Redwood Falls, Minnesota 56283
To order memorial trees or send flowers to the family in memory of John Buckley, Sr, please visit our flower store.