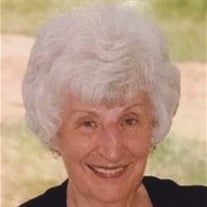 Joan (Riley) Moelter, loving mother, passed with peace and grace on May 13, 2018 at Pacifica Memory Care in Las Vegas, Nevada. She was 82 years old. A Memorial Mass will be held at 2:30 p.m. on Saturday, June 2, 2018, from St. Anne’s Catholic Church in Wabasso, with lunch to follow. Visitation will be held on Saturday, June 2, from 1:30 until 2:30 p.m. at the church. Inurnment will be next to her beloved husband, Joe, at a later date in Fort Snelling National Cemetery. The family requests no gifts, but cards, flowers and special memories are welcome.

Joan Helen (Riley) Moelter, the daughter of Helen T. (Berg) Riley and John Peter Riley, was born August 12, 1935, in Wanda, Minnesota. Joan graduated from St. Anne’s Catholic School in Wabasso in 1953 and married her high school sweetheart, Joe Moelter, while he was on a three day leave from the Navy in 1954. They were stationed in Long Beach, California, where son Joey was born. They were then stationed in Seattle, Washington where Vickie was born. They eventually settled in the Twin Cities where Joe graduated from the University of Minnesota as an Electrical Engineer. Joe became a Master Electrician and Joan worked as a nursing assistant for many years. Lisa and Chris came along several years later. Joan loved children and even spent three years running a small home daycare.
In the early 80’s Joan and Joe bought a Dairy Queen in Minneapolis. Joan was a real people person and loved working there. After they sold the Dairy Queen and retired, Joan and Joe moved to California, living near Joe’s sisters Bernadette DeDoes and Katherine Morris. Joan loved spending time with Bernie and Kathy, going to garage sales on the weekend, and playing games at the community centers. But Joan and Joe spent a lot of time in Las Vegas, where Joan loved to play, so they ended up moving there, near daughter Lisa and son-in-law DJ. They loved going to their cabin in Hayward, Wisconsin in the summer where the whole family was always welcome to spend time with Joe and Joan. She will be always remembered as a loving mother, grandmother and great-grandmother. It is fitting that she entered God’s hands on Mother’s Day.
Due to the devastating effect of Alzheimer’s Joan’s memories became few in the past year. However, she leaves us rich in memories and we will always remember our time with her. Joan loved to receive cards and letters from friends and relatives and she saved most of those she received. These were so special to her family as they kept her engaged and kept memories of family and friends alive.
Joan is survived by son Joseph Benno Moelter of Hayward, Wisconsin, daughter Vickie (Kobi) Phillipps of Grantsburg, Wisconsin, daughter Lisa (DJ) Moelter-Emery of Las Vegas, Nevada, and son Christopher (Ashleigh) Moelter of St. Peter, Minnesota. Joan was the proud grandmother of 15 grandchildren: Danielle, Becky, Michelle, Mark, Dawn, James, Nick, Joe, Sarah, James, Christopher, Makenna, Jack, Cooper, Callan; and 19 great-grandchildren: Gabi, Ava, Anton, Harper, Addison, Ryland, Brooks, Oakland, Hadley, Nicole, Noelle, Caden, Owen, Ryan, Michael, Annalee, Benjamin, Geneva and Emmett.
She was preceded in death by her loving husband Joseph Leo Moelter who passed away in 2015.
Blessed be her memory.
To order memorial trees or send flowers to the family in memory of Joan Helen Moelter, please visit our flower store.