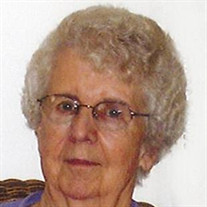 Joan Mary Andre was born on July 17, 1927, at home in Franklin, the daughter of Louis & Marie (McFarland) Andre. Joan was born in the Kirwin home that later became the Fox Family home. She grew up in Franklin and graduated from FHS in 1946. She worked in a defense plant in St. Paul for a short time, and then worked at the Kirwin Drug Store in Franklin.

On September 25, 1948, she was united in marriage to Edward L. Fox at the Sacred Heart Catholic Church in Franklin. They were blessed with six children. They farmed for 26 years living in a little farm house with no running water. Joan loved taking care of people and went back to work in the ‘80s at the Franklin Nursing Home. She also loved to cook and bake for her family and frequent visitors. She enjoyed gardening and always had beautiful flowers.

Joan moved into Garnette Gardens in June of 2012, where she continued to entertain many visitors, and established a new family of residents and staff. She remained at Garnette Gardens until her final days in Hospice Care.

Blessed Be Her Memory
To order memorial trees or send flowers to the family in memory of Joan Fox, please visit our flower store.

Church of the Sacred Heart