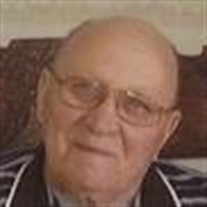 In 1945 he moved with his family to Bertha, Minnesota, then to Olivia in 1948 and to Renville in 1954. Jerry entered the U.S. Army on March 16, 1955 serving until March 15, 1957 He returned to Renville and was united in marriage to Harriet Reynolds on September 9, 1961 in Morton. They lived in Renville until moving to Birch Cooley Township in 1969 where he farmed until retiring in 1995. Jerry and Harriet moved into Morton in 1997. Jerry was a member of the United Methodist Church in Morton until it closed and they became members of First United Methodist Church in Redwood Falls. He served on the Harvest Land Cooperative Board of Directors for nine years, was a charter member of the Morton Lions Club, and drove school bus in the winter for Morton Public Schools.

Blessed be his memory.
To order memorial trees or send flowers to the family in memory of Jerome "Jerry" Deinken, please visit our flower store.