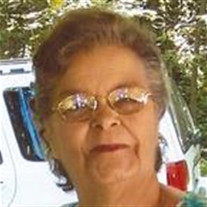 Janet Becky (Nemitz-Loiselle) Kreft, the daughter of Ferdinand and Stella (Prodoehl) Nemitz, was born January 30, 1941 in Renville County. She was baptized and confirmed at Middle Creek Church. Janet graduated from Redwood Falls High School in 1959.

On August 25, 1963, Janet married Richard Loiselle at Church of Peace in Richfield. In 1968, she moved to a farm place south of Renville with her children where she lived until her marriage to Hartwin Kreft on March 7, 1970. They then made their home on a farm near Vesta. Janet spent many years homemaking, gardening and, when needed, working in the fields.

She moved to Redwood Falls in 1986 and worked at Zytec and Artesyn for a number of years. Janet then worked at Jackpot Junction Casino for 11 years before retiring. Over the years she enjoyed sewing, quilting, crocheting and crafts, but most of all helping her dad build kitchen cupboards. In her later years, Janet enjoyed getting to know her grandchildren and great-grandchildren.

Blessed be her memory.
To order memorial trees or send flowers to the family in memory of Janet B. Kreft, please visit our flower store.