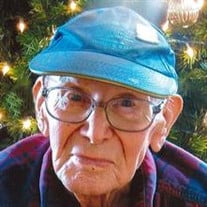 Growing up, Jim attended District 16 Country School just down the road from the farm where was to live for 89 years. As his sibling moved off the farm Jim stayed, eventually running the farm himself. Farming was his life and he loved to tell stories of the “old” days, how hard they were, but also how everyone, neighbors and family, helped out. Family was important and the Allison farm was a gathering point for many events as many pictures and stories show. Jim would talk to anyone who would listen about his farming days, his flying days and his trips to town on Saturday night. Stories tell that he had many happy days, but it was a very sad day when, after 89 years, he had to move to town. Jim never liked living off the farm and for years called it “a jail” but also knew he could not live alone. In 2017 he had to move again, this time to the care center where he died a natural death.

Many of us will always remember Jim as the guy with the short crew cut haircut under that dirty old Catfish Days hat, sitting out on that old wooden chair out on the front step of his beloved farm site, looking out across his valley.

Jim is survived by his brother Edward (Eileen) Allison of Rosemount, sister-in-law Rose Marie Allison of Chaska, and many nieces and nephews. He was preceded in death by his grandparents James and Elizabeth (Winter) Allison, and Christian Frederik and Catherine (Strong) Larsen; his parents; sister Florence Nelson; brothers Lyle and Charles; and nephew “Jack” Nelson.

Good-by Jim.
To order memorial trees or send flowers to the family in memory of James F. Allison, please visit our flower store.