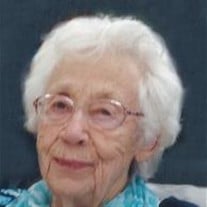 Irene Wintheiser, 92, of Morgan died Thursday, March 26, 2015 at Gil-Mor Manor in Morgan. Mass of Christian Burial will be held at 10:30 a.m. on Wednesday, April 1, 2015 from St. Michael’s Catholic Church in Morgan with burial to follow in the church cemetery. Visitation will be held on Tuesday, March 31, 2015, from 4 until 7:30 p.m., at Nelson-Hillestad Funeral Home in Morgan. A prayer service will be held at 7 p.m. on Tuesday, also at the funeral home. Visitation will continue on Wednesday, at the church, for one hour prior to services.

Irene Mary Hacker Wintheiser, the daughter of Joseph and Anna (Reding) Hacker, was born June 26, 1922 in Morgan. She grew up on the family farm and received her formal education in Morgan.

On December 2, 1944, Irene married Art Wintheiser in Morgan and they made their home on a farm near Evan for a time. The couple then purchased the farm next to Irene’s home place where, together, they farmed their entire married life. Irene remained on the farm following Art’s death in 1984 until recently moving to Gil-Mor.

Family was most important to Irene. She lived for her kids and grandkids and enjoyed cooking and baking for them. She was a member of St. Michael’s Catholic Church, St. Anne’s Society and Christian Mothers’ Society.

She was preceded in death by her parents; husband Art in 1984; sister Doris Rehder; brother Clem Hacker; and brothers- and sisters-in-law Margie Hacker, and Leo (Marcella), Denis, Richard, Norbert, Ralph, and Phyllis Wintheiser.

Blessed be her memory.
To order memorial trees or send flowers to the family in memory of Irene Mary Wintheiser, please visit our flower store.