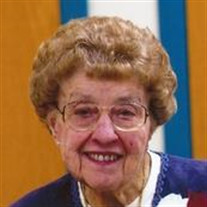 Hertha Zimmerman, 95, of Redwood Falls passed away Thursday, May 25, 2017 at Season’s hospice in Redwood Falls. Funeral services will be held at 11 a.m. on Tuesday, May 30, 2017 from Trinity Lutheran Church, Willow Lake Township, rural Wabasso with burial to follow in the church cemetery. Visitation will be held Monday, May 29, 2017, from 4 until 7 p.m., at Nelson-Hillestad Funeral Home in Redwood Falls and will continue on Tuesday, from 10 until 11 a.m., at the church.

On October 15, 1940, Hertha married Herman Zimmerman at Trinity Lutheran Church and they lived and farmed in New Avon Township for the next 42 years. Hertha and Herman retired in 1982 and moved into Redwood Falls. Hertha was a life-long, very active, member of Trinity Lutheran Church. She was involved in ladies’ Bible Study, Extension, and many card clubs. Hertha enjoyed farming alongside her husband and family.

Hertha was preceded in death by her husband Herman; her daughters LaVera and Doreen; grandchildren Julie and Tom Goblirsch; brothers Harold, Roy, Louis, and Herbert Guggisberg; and sisters Lorna Moore, and Alice Krizan.

Blessed be her memory.
To order memorial trees or send flowers to the family in memory of Hertha Zimmerman, please visit our flower store.