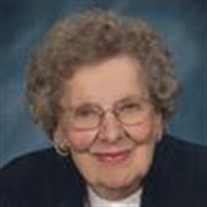 Helen Adeline Woodford, the daughter of Floyd and Clara (Bertness) Skelton, was born November 19, 1917 in Sioux Rapids, Iowa. Helen grew up in Sioux Rapids and graduated from Garfield High School. She received her teaching certificate from Beuna Vista College in Storm Lake, Iowa and went on to teach in country schools.

On May 9, 1936, Helen married Leroy Woodford in the Congregational Church parsonage in Sioux Rapids. The couple farmed south of Redwood Falls for a time. The Woodfords then lived on the south edge of town where they moved a house from Delhi, built a basement under it and then remodeled the house. It was there that Leroy and Helen started his trucking business. They later relocated to a farm west of Redwood Falls. Following their retirement from farming, Helen and Leroy moved into Redwood Falls. Helen kept busy raising their five sons; she later was employed for 13 years as a nurses’ aide at the Redwood County Nursing Home and then Wood Dale Nursing Home.

She was preceded in death by her husband Leroy on October 18, 2003; her brothers Wendell Skelton, Russell Skelton, Raymond Skelton, Nathan Skelton, and Floyd Skelton in infancy; and her sister Cordelia Johnson.

Blessed be her memory.
To order memorial trees or send flowers to the family in memory of Helen Adeline Woodford, please visit our flower store.