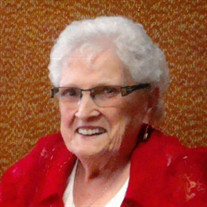 Helen Hedwig Welsch was born February 18, 1934 to Alfred and Ida (Tonn) Schuette in Glencoe, Minnesota. She attended school in Glencoe through the 10th grade. At that time, she left school to begin work to assist the family with medical bills of her brother, Rueben. On October 20, 1956, she married Russell James Welsch at St. Peter and Paul’s Catholic Church in Glencoe, Minnesota. After their marriage they made their home in Clements, Minnesota. They lived in the same home for 57 years. During her life in Clements, Helen worked as a waitress in the local café, daycare provider, scale operator at the Sugar Beet Loading Dump by Clements, a Nursing Assistant at Gil-Mor Manor Nursing Home and finally as the Activity Director for Gil-Mor Manor from 1972 until her retirement in 1992. In December 1991, she was awarded the WCCO Good Neighbor Award in Recognition of Outstanding Service with distinction as a Good Neighbor through her work as Activity Director at Gil-Mor Manor. While living in Clements she was active in The American Legion Auxiliary, St. Joseph's Catholic Church Christian Women, a member of the church choir, and a Liturgy and Eucharistic Minister. When St. Joseph’s Catholic Church closed, they transferred to St. Catherine’s Catholic Church of Redwood Falls where she continued being a Liturgy and Eucharistic Minister. Russ and Helen moved to their home in Redwood Falls on December 14, 2014.
Helen's faith was a very important part of her life. Her children, grandchildren and great grandchildren were also important to her. She enjoyed spending time with them, attending grandchildren and great grandchildren’s special events such as dance recitals, football, hockey and baseball games and their graduation and wedding celebrations. While residing in Redwood Falls, she was active in the Redwood Falls Senior Dining Program and volunteering at the Redwood County Fair.
She and Russ had many special moments in their life together. They enjoyed weekend visits with family and friends, card parties with friends, summer camping trips, their 25th Wedding Anniversary trip to Hawaii and later, their summer place on Lake Mary. Helen enjoyed reading, cooking and baking, sewing and crocheting, her Card and Birthday Club and her Wednesday night “Family Happy Hour” with Russ, Jim and Lynn.
Helen died on Sunday, March 22 at Seasons Hospice House in Redwood Falls at the age of 86 years.
Helen is survived by her husband of 63 years Russell, children; Lynn Welsch-Buckley (special friend- Mark Trefry) of Redwood Falls and Jim (Joleen) Welsch of Springfield, Grandchildren Katrina Buckley of Sleepy Eye, Lt Andrew Buckley (US Navy-Oxnard CA and currently deployed), Jennifer (Ben) Boike of Rosemount, and Chad (Michele) Swenstad of Sleepy Eye. Great grandsons; Jaylin, Nolan, Jack, Eli and Carter. Great Granddaughters; Evan, Emma, Madison and Ashlynn, Sister; Marilyn Vorbeck of Glencoe, Brother; Myron Schuette of Minneapolis, Sister-in-law Caroline Welsch of Sleepy Eye, and several nieces and nephews.
She was preceded in death by her parents, Alfred and Ida (Tonn) Schuette, Brothers; Elford, Rueben, Orrin, and Sister; Verdell Freter, Parents-in-law; Tony and Bertha (Suess) Welsch, Brother-in-laws; James, Fred, Tony (Jr.) and Donald Welsch, Herbert Dietl, Menno Elsing, Roger Vorbeck and Emil Freter. Sister in laws; Marianne, Alice, and Lydia Schuette, Delores Dietl, Lorraine Elsing, and Elaine Welsch. Nieces-Rose Irlbeck and Norma Janske, and an Infant great granddaughter; Kylie Boike.

Blessed be her memory.
To order memorial trees or send flowers to the family in memory of Helen H Welsch, please visit our flower store.