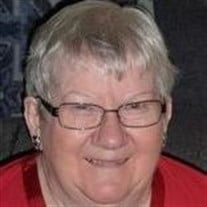 Helen Loraine Lemcke, the daughter of Harold and Laura (Meyer) Zimmermann, was born January 5, 1934 in Morgan. She grew up in Morgan and graduated from Morgan High School in 1952. As a teenager, Helen spent many hours babysitting and later worked at the Morgan Bakery.

On November 2, 1955, Helen married Arden Lemcke at St. John Lutheran Church in Morgan and they made their home in Morgan. Helen belonged to the New Horizons Extension group and enjoyed babysitting, sewing, playing cards, and visiting. She was a member of St. John Lutheran Church, its WELCA and Bible study group. As a teenager, Helen was active in the church’s Luther League. Helen did seasonal work at DelMonte before becoming employed as a medical assistant at Gil-Mor Manor in 1971. She retired from Gil-Mor Manor in 2000, after 29 years of employment there.

Blessed be her memory.
To order memorial trees or send flowers to the family in memory of Helen Lemcke, please visit our flower store.