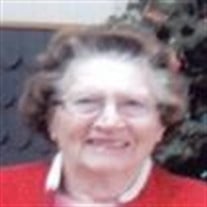 Hazel Krueger, 101, of St. Cloud and formerly of Redwood Falls died Monday, October 6, 2014 at Country Manor home in Sartell. Funeral services will be held at 11 a.m. on Friday, October 10, 2014 from Trinity Lutheran Church – Willow Lake Township, with burial to follow in the church cemetery. Visitation will be held Thursday, October 9, 2014, from 4 until 7 p.m., with a prayer service at 6:30 p.m., all at Nelson-Martin Funeral Service in Redwood Falls. Visitation will continue on Friday at the church for one hour prior to services.

Hazel Marie Krueger, the daughter of Thomas and Elizabeth (Schaffer) Iesh, was born November 11, 1912 in Renville. She grew up in North Redwood and received her formal education there. Hazel moved to Redwood Falls in 1929 and was married to Raymond Volk. In 1950, Hazel began her employment with Northwestern Bell telephone as a custodian. She retired in 1975.

On August 8, 1958, Hazel married Edwin Krueger in Clear Lake, South Dakota and they made their home in Redwood Falls. Edwin preceded Hazel in death on February 3, 2003. She was a member of Trinity Lutheran Church – Willow Lake Township and the altar guild.

Blessed be her memory.
To order memorial trees or send flowers to the family in memory of Hazel Marie Krueger, please visit our flower store.