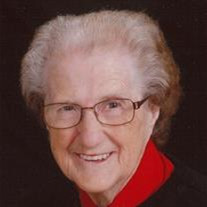 Harriet Louise Jensen, the daughter of Rollie and Carrie (Wilcox) Watkins, was born November 28, 1925 in Redwood Falls. She grew up in the Morton-Redwood Falls area and received her formal education in country school, Morton and Redwood Falls high schools. Harriet graduated from Redwood Falls High School in 1943.

On March 19, 1945, Harriet married Russell Jensen. They made their home in the Redwood Falls area and also lived in Olivia, Danube and Clements. Harriet was first and foremost a wife, mother and homemaker. She also worked as a hired girl for the Reque family, sold Stanley products and worked at the DelMonte sweet corn plant. Harriet then worked at Control Data/MPI/Zytec/Artesyn until her retirement at the age of 72 – or so. She was a member of First United Methodist Church and the United Methodist Women. Harriet belonged to the Redwood Falls Christian Women’s Club, the Birthday Club and Royal Neighbors. In her spare time Harriet enjoyed doing word search puzzles, watching the Minnesota Twins and Wheel of Fortune, and playing cards.

She was preceded in death by her husband Russell in October 1989; sisters Ardith Jean Watkins and Dorothy Ruoho; brothers Donald and John Watkins; granddaughter Elizabeth; and great-granddaughter Niya.

Blessed be her memory.
To order memorial trees or send flowers to the family in memory of Harriet Jensen, please visit our flower store.