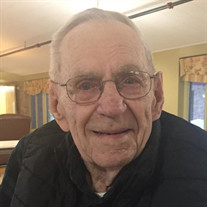 Harold A. Wersal, the son of William and Mary (Roiger) Wersal, was born on August 31, 1925 in Springfield, Minnesota. He attended District 59 Country School and 2 years at St. Raphael Catholic School in Springfield. Harold married Mary “Lena” Sellner on April 14, 1948 at St. Mary’s Catholic Church in Sleepy Eye, Minnesota. They lived and farmed east of Springfield until 1950, when they moved to a farm in Eden Township, east of Morgan. In 1972, they moved to a farm west of Morgan and after retiring in May 1992, they moved into town. In 2017, they moved into an apartment at Gil Haven and then into Gil-Mor Manor in Morgan.

Harold truly enjoyed being a farmer and cattle dealer for 44 years. He established Wersal Livestock, which is now being carried on by two of his sons. Harold was an active member of St. Michael’s Catholic Church of Morgan, Knights of Columbus, Catholic Aid, Catholic Order of Foresters, and served as a Trustee, and Eucharistic Minister.

He enjoyed helping others by volunteering in many areas as a Lions member, Boys Scout Leader, Farmfest volunteer and helped manage the St. Michael’s Cans for Cash Program.

Blessed be his memory.
To order memorial trees or send flowers to the family in memory of Harold A. Wersal, please visit our flower store.