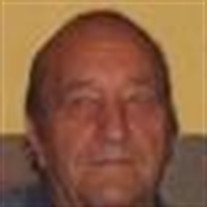 Harlan Walter Raddatz, the son of Reinhold and Cecelia (Schmidt) Raddatz, was born December 18, 1934 on the family farm in New Avon Township, Redwood County. He grew up on the farm and received his elementary education in District 14 rural school. Harlan attended Dr. Martin Lutheran High School in New Ulm, graduating in 1952.

On September 5, 1959, Harlan married LaDonna Gilb at Our Savior’s Lutheran Church in Milroy and the couple lived and farmed the Raddatz home place. Harlan retired from farming in 1995 and the couple moved into Redwood Falls. Harlan then worked in the maintenance department at the Redwood County Courthouse, retiring in 2004. He became a resident at Garnette Gardens in 2016.

Harlan loved polka music and was an accomplished concertina player. He was a member of St. John Evangelical Lutheran Church.

Blessed be his memory.
To order memorial trees or send flowers to the family in memory of Harlan Raddatz, please visit our flower store.