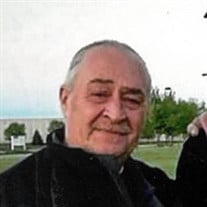 Gregory Loftus was born on August 7, 1952 to John & Jane (Walker) Loftus in Biloxi, Mississippi. He graduated from Redwood Falls High School in 1972. Greg married Sandy Revier on October 28, 1972. He had joined the Marine Corp and was stationed at 29 Palms Marine Base in California from 1972-1973. He was then stationed at Kaneohe Marine Air Station in Kaneohe, Hawaii from 1973-1976, during the Vietnam War.

Greg and Sandy returned to Redwood Falls after he was discharged. They raised 2 children and Greg owned and operated Redwood Taxi. He worked at the Redwood Falls Airport Weather Service and Monsanto. Greg so enjoyed to grill, go to the cabin up north by McGregor, spending time with family. He enjoyed his pets, playing pranks on his grandchildren and friends.

Gregory is preceded in death by his parents, John & Jane Loftus, brothers, Daniel and Donald.

Blessed be his memory.
To order memorial trees or send flowers to the family in memory of Gregory 'Lefty' Loftus, please visit our flower store.