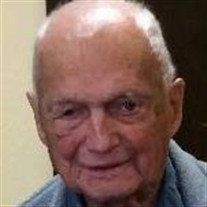 Gordon Alvin Pederson, the son of Iver and Lena (Johnson) Pederson, was born August 30, 1927 on the family farm near Walnut Grove. He grew up on the farm and received his formal education in Walnut Grove Public School. Gordy’s parents died when he was 11 years old and he shouldered much of the responsibility of running the farm and caring for his siblings. He enlisted in the United States Air Force and served during the Korean Conflict. Following his honorable discharge, Gordy returned to the area.

On December 21, 1957, Gordy married Marlys Westley at the Lutheran Church in Cottonwood. The couple lived in Marshall for a short time, then moved to Redwood Falls. Gordy worked as a mechanic, first for Scott-Preusse, then Burris Oldsmobile and later Baker Brothers. He then opened his own small engine repair shop. Gordy was a member of the American Legion and Gloria Dei Lutheran Church. He had a strong faith and regularly listened to church services on the radio and television. Gordy enjoyed collecting John Deere tractors and memorabilia and particularly enjoyed spending time with his family – especially his grandchildren and great-grandchildren. Gordy was a good guy.

Blessed be his memory.
To order memorial trees or send flowers to the family in memory of Gordon Pederson, please visit our flower store.