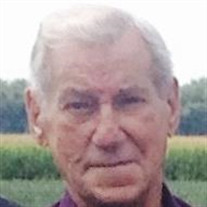 Glenn Joseph Kerkhoff, the son of Ben and Theresia (Wimmer) Kerkhoff, was born February 27, 1931 on the family farm in Morgan Township, Redwood County. He grew up on the farm and received his formal education in District 99 rural school and St. Michael’s Catholic School. Glenn was inducted into the United States Navy in 1951. He served on the USS Ross 563 Destroyer until his honorable discharge in 1955.

On November 28, 1958, Glenn married Arlene Zieske at St. Michael’s Parish house and they made their home on the Kerkhoff family farm. Glenn was a farmer and a heavy equipment operator. He drove truck for Jemmings and was a heavy equipment operator for Hotovec’s out of Danube and Bloemke Construction in Morgan. He later was self-employed in heavy construction and grading township roads as well as snow plowing for various townships. Glenn also worked with his children’s company, TNT Construction of Morgan, running dozer and road grader, up through March 2015. He was a member of St. Michael’s Catholic Church, the Knights of Columbus, and V.F.W. Post 5771. Glenn played guitar in various bands for 60 years – including the last 36 years with Johnny Helget. He enjoyed going to the lake, fishing, pontooning, and relaxing there. Glenn also enjoyed woodworking and working part time.

He was preceded in death by his wife Arlene in August 2014; and brothers Bernard, Harold, Raymond, Delbert, and Herbert Kerkhoff, and sisters Lucille Eischen, Verna Mertz, Sally Anderson, Eileen Brown, and Delores Wenner.

Blessed be his memory.
To order memorial trees or send flowers to the family in memory of Glenn Joseph Kerkhoff, please visit our flower store.