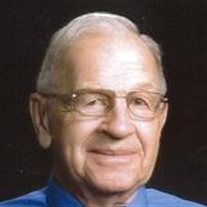 Glenn Orrin Houtkooper, the son of John and Mabel (Miller) Houtkooper, was born March 10, 1931 on the family farm near Brandt, South Dakota. He grew up on the farm and received his formal education in the nearby country school.

On June 26, 1951, Glenn married Bernice Torgerson at Wood Lake Lutheran Church in Astoria, South Dakota and the couple lived in Canby, Minnesota where Glenn worked at the co-op. They started farming in rural Brandt in 1955 and moved to a farm near Austoria in 1957. Glenn began his career in farm equipment sales in 1959. He worked in Brookings, South Dakota until 1963 and then Owatonna until moving to Redwood Falls in 1966. Glenn sold for Badger Northland and Wood & Conn for 33 years. Following his retirement in 1995, he worked part-time for Wood & Conn until 2010. Glenn then began transporting vehicles for Kohls-Weelborg Ford, a job he held until his death.

Blessed be his memory.
To order memorial trees or send flowers to the family in memory of Glenn Orrin Houtkooper, please visit our flower store.