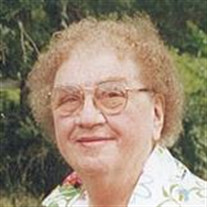 Gladys Edith Shippman, the daughter of Peter and Pauline Mathilda (Lenz) Shippman was born March 15, 1922 on the family farm in Flora Township, Renville County, Minnesota. She grew up on the farm and received her elementary education in Flora Township District 8 School. Gladys furthered her education in Redwood Falls and graduated high school here in 1941. The following year, Gladys moved to LeCenter where she worked in the typing department at Spurs Wholesale Company. She returned home in 1943 to help on the farm and take care of her parents. Gladys’ mother died in 1947 and Gladys remained at home to help her father with the farming operation. Following his death in 1966, Gladys began working as a nurses’ aide at the Redwood County Nursing Home. In 1968, she was hired by the Redwood Falls Hospital where she worked as a nurses’ aid for 16 years.

Gladys was a member of St. John Evangelical Lutheran Church where she was baptized in April 1922 and confirmed in May 1939. Gladys enjoyed gardening and raising flowers to share. Spring, summer and fall, Gladys regularly brought bouquets of flowers to nursing home residents, downtown business offices, and the elderly living in apartment buildings. She gave away over 500 bouquets each year! Gladys enjoyed musical programs and rarely missed a school concert. In 1971, she began taking bus tours and ultimately visited the entire “lower 48” as well as all the Canadian provinces. She also attended a military band concert in Constitution Hall in Washington, D.C. and was able to attend various plays and concerts at Kennedy Center over the years.

Gladys is survived by many special friends and relatives. She was preceded in death by her parents, and her sister Adeline in 2012.

Blessed be her memory.
To order memorial trees or send flowers to the family in memory of Gladys Edith Shippman, please visit our flower store.