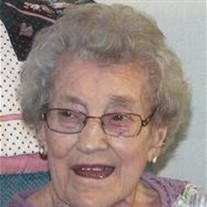 On April 25, 1936, Geraldine married Clarence K. Hewett in Ft. Dodge, Iowa. They made their home in Redwood Falls. Clarence died April 3, 1981. In October 1988 Geraldine married Roland Kuglin. Roland passed away March 2014. Gerry, Toots, or Tootie as she was known to friends and family raised five daughters and supported Clarence by keeping the business records for his trucking service. She also worked for a while as a cook for the Redwood Falls school. She was active in the Degree of Honor, the auxiliaries of the Veterans of Foreign Wars and the American Legion. She was honored for over 50 years of service to the VWF Auxiliary. She was also active in the Cornerstone Christian Church's Sunshine Circle doing charitable activities. Until her death, she was the longest living member of the Cornerstone Christian Church. Geraldine also participated in activities at the Redwood Falls Senior Center.

Geraldine liked to eat popcorn and play card games, especially Uno Attack. She also enjoyed the bright lights and noise at the Casino. Geraldine absolutely loved anything Western and especially loved watching "Cowboy" movies. She was really good with her hands and taught her daughters how to knit, crochet and embroider. She enjoyed listening to the soap operas while ironing, especially after they were televised. She was a terrific baker and her donuts were the best. Geraldine remained independent until 2012 then spent her declining years in assisted living at Johnson Park Place followed by Sunwood Nursing Home and Long Prairie Nursing Home.

Blessed be her memory.
To order memorial trees or send flowers to the family in memory of Geraldine Kuglin, please visit our flower store.