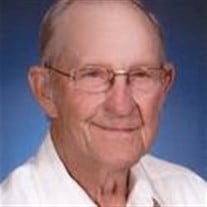 Gerald Edward Eisenbarth, the son of Joseph A. and Clara (Hildman) Eisenbarth, was born October 22, 1929 in Eden Township, Brown County. He grew up on the Eisenbarth homeplace near Franklin and received his formal education in St. Michael's Catholic School.

On November 28, 1951, Jerry married Mary Cronin at Church of the Sacred Heart in Franklin and they made their home on the family farm. Jerry and Mary were blessed with five daughters. She preceded him in death on February 27, 1990. Jerry later married Lois Ness-Hartung in Hector; she also preceded him in death.

For over 70 years, Jerry farmed and also did gravel hauling and excavation. He retired in 2013 due to health reasons. Jerry was a member of the Church of the Sacred Heart where he sang in the choir and served as an usher. He belonged to the Knights of Columbus and the Franklin Lions. Jerry could fix anything. He enjoyed woodworking, putzing in his shop, playing cards, fishing, playing pool, trapshooting and riding motorcycle. Most of all, Jerry loved being with his family.