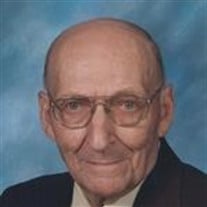 George Donald Holzerland, the son of George P. and Veronica (Katzenberger) Holzerland, was born August 14, 1929 in Sheridan Township, Redwood County. He grew up on the family farm in Sheridan Township and received his elementary education in District 103 rural school. George graduated from Wabasso High School in 1947. Following graduation, George continued to farm until his enlistment in the United States Air Force in 1950. He served his country during the Korean Conflict and, after his honorable discharge, returned to farming in Sheridan, Vail, and Redwood Falls townships. George farmed for 20 years before moving to Mankato where he was employed at Kato Engineering and then Jones Metal Products. He was the foreman at Jones Metal Products until his retirement in 1991.

George was a member of Holy Rosary Catholic Church in Mankato, the Mankato Knights of Columbus, and American Legion Post 518. He enjoyed gardening, spending time outdoors, and traveling. George especially loved the mountains and desert.

George is survived by his brother Edward of Rosemount; nephew Paul (Brenda) Holzerland of Hanska; niece Mary Jo (Jeremy) Hoffrogge of Mason City, Iowa; and many friends and other relatives. He was preceded in death by his sisters Delores Holzerland and Mary Holzerland.

Blessed be his memory.
To order memorial trees or send flowers to the family in memory of George Donald Holzerland, please visit our flower store.